I’m looking forward to meeting many of you at the Guide Dog Users Inc. luncheon on July 9th. I really appreciate GDUI allowing me to sell my book during the luncheon. I thought you might want to know what to expect. The audio version of the book will be on a flash drive engraved with the name of the book, “Out of the Whirlpool.” The flash drive contains 60 MP3 files, one for each chapter of the book.

The print books are paperback, just under 400 pages. On the copyright page of the print books will be something like the following:

I will be selling the books, both audio and print for $10, which is substantially less than the retail price of $17.95 for the print and $16.95 for the audio. I’ve always wanted to see an audio book priced less than the same book in print! You may pay by cash or check. Make checks payable to Sue Martin. I’m working on being able to accept credit cards but I won’t know about that until the end of this week.

Below is an image of the flash drive along with the cover of the print book and the photograph and text on the back of the book. 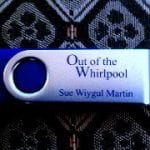 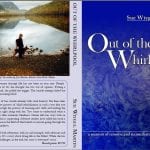 Text on Back Cover:

OUT OF THE WHIRLPOOL
Sue Wiygul Martin
Photograph of the author by Jim Martin, Baxter State Park, Maine

SUE MARTIN’S journey through life has not been an easy one. Deeply depressed, at the age of 26, she thought she was out of options. Putting a loaded gun to her head, she pulled the trigger. The suicide attempt failed but resulted in Martin’s becoming blind.

Martin tells the story of her suicide attempt with stark honesty. She then takes the reader through the process of blind rehabilitation in such a way that you feel you are going through the process of learning new skills and making the emotional adjustment right along with her. You come to understand what it takes to rebuild a life after traumatic blindness. Martin tells her story with an honesty and humor that is captivating. Advance readers have called her book a “Must read” for anyone in the field of blind rehab or anyone going through the adjustment to new blindness.

Martin’s book is filled with adventure, with joy and triumph, with adversity and adjustment to change. It’s a story about living life to the fullest. While she has faced extraordinary challenges, in the end, her story is everyone’s story.

View all posts by smartin →
← The Blue Wall
GDUI Recording →