“She Lives To Serve” 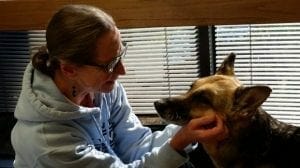 The author and her Seeing Eye dog

She says today that self-inflicted gunshot wound was “a desperate act in an attempt to end unbearable pain.” It almost took her life and she’s been living with the consequence — blindness — for almost 33 years.

“My marriage ended, I lost my job — actually I resigned, but it still felt like I lost my job — I moved back in with my parents and those are, you know, tough breaks,” Martin said in an interview.

“I have been living with the consequences of my suicide attempt, every day, for almost 33 years.”

Today, she is working with a group to help others affected by suicide, either through their own unsuccessful attempts or through the attempts of their loved ones.

She is part of a small group, Kismet Out Loud, named for her seeing eye dog — which shares her name with the Arabic word for destiny or fate — that has hosted two meetings at Saint Mary’s on the Highlands Episcopal Church in Birmingham for those affected by suicide.

The next meeting is October 29 at noon.

“We believe that lives are saved, one at a time, in an open, honest conversation, discussion,” Martin said.

Alabama is disproportionately affected by suicide.

In 2013, the most recent year for which data was available, 719 people died in suicides in Alabama, according to the state department of public health.

The state that year had a per capita suicide rate of 14.9 per 100,000 people, while the national rate was 13, according to the Centers for Disease Control.

Martin has worked for 13 years with the U.S. Department of Veteran’s Affairs in Homewood. Although not a veteran herself, she helps to make sure veterans living with disabilities are able to use computer software.

She shares her office with Kismet, her fourth seeing eye dog, who has helped guide her for more than 10 years.

Martin has written about her experience — a revised version of her book, “Out of the Whirlpool” is coming out soon — and she speaks to groups about her attempt and subsequent blindness.

Although there are other groups working on suicide prevention and supporting those touched by suicide, Martin said her group wanted to offer “something different.”

“There’s a different niche to be filled, that’s a place where you can sit on the floor in an intimate place and you can talk about mental health issues — yours or a family members or a friends,” she said.

“And, believe it or not, they’re fun. Mental health and suicide are very serious topics but the discussions do not have to necessarily be depressing.”

‘It’s our destiny to change those numbers’

Martin and two of the other organizers of the meetings went skydiving together about a week before a recent meeting of the Kismet group.

“We were able, at that meeting, to provide support and answers, but we also laughed a lot too,” Martin said.

While she hopes the group grows, Martin said she hopes it keeps a feeling of “openness and acceptance.”

Ultimately, she hopes the group can do something to reverse Alabama’s upward suicide trend.

“It’s our destiny, at least partially, to change those numbers,” Martin said.

“It might sound odd but I have no regrets about the path I’ve taken to this point in my life. By now blindness is really not that big a deal,” she wrote in a recent blog post.

“I do regret the pain and anguish I caused my family and community,” she told AL.com.

Today, she just wants to help others who are where she once was.

“So many people step up to the line that we really don’t know about,” she said of suicide attempts.

“It doesn’t have to define you for the rest of your life.”

She says she is proof of that.

“I’m just a person living life the best way I can. That’s what I’m here for.”

Her motto is a quote from writer Rabindranath Tagore: