®In Dog We Trust 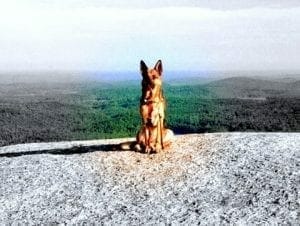 Quoddy dog on Peaked Mountain, Maine. Sitting towards camera with woods and hills in the background.

Independence, Thrills, and Dignity With My Seeing Eye Dogs

Limited Edition A companion to

Out of the Whirlpool: A Memoir of Remorse and Reconciliation 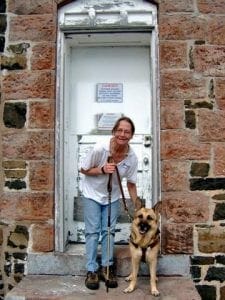 Sue and Kismet in front of an abandoned building on Passage Island in Lake Superior.

There were no dogs.

A year and a half after my life with blindness began I enrolled in a master’s program at Western Michigan University. In the process of acquiring a master’s in blind rehabilitation I also acquired a husband. Our first “date” was a trip out in the woods for a class assignment. That morning I fell in a manhole.

I clearly needed better orientation and mobility skills. Or a new means of travel.

The walkway to the front door of The Seeing Eye in Morristown, New Jersey is  called  “The  Path  to  Independence.”  Some of the bricks are engraved. In keeping with their tag line, “Independence with Dignity since 1929,” placing a brick in “The Path” gives us an opportunity to demonstrate our appreciation for what the school has done to enhance our independence.

On the day of the dedication Lukas Franck, a trainer took pictures of bricks and sent them to graduates. Then he placed an orange cone over each brick and took a picture from a distance so graduates would have an idea of the location of their brick. 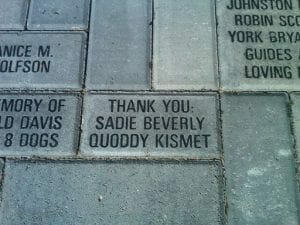 You can still purchase a brick. Periodically the school adds bricks to the “Path.” In September of 2015 another brick was added to the “Path”. 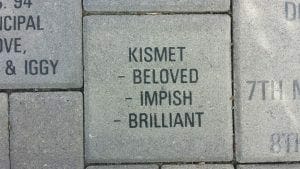