That All May Read 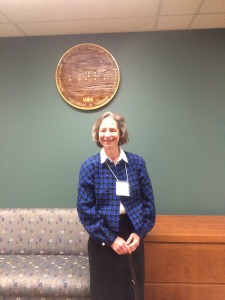 One of the first things that was restored to me following the loss of my eyesight was the ability to read. I was still in the hospital when the talking book player from the National Library Service for the Blind and Physically Handicapped, NLS, arrived. The taped instructions were inserted into the player but I didn’t listen to them. Instead, thinking I’d be delighted to have the ability to read again, my parents inserted the first tape of one of the books that had come with the player. I was about half way through that book when I realized that it seemed I was missing a lot of the book. I was using the player the way I had used every other tape player in the world. I listened to the first side and, at the end, flipped over the tape and listened to side two. When that was done I went on to the next tape. Only when I opined that I wasn’t able to follow the book did the truth come out.

Once I figured out how the player worked the world of reading and literature was open to me once again. I dove into it. It would be weeks before my blind rehab instructors came into my life and began teaching me the skills I needed to live with blindness. So, for a good month or so, talking books were my main diversion. It would, indeed, be difficult to overstate how important those talking books were to me at that point in my life. Although I didn’t think of this at the time I believe that having the ability to read so soon after becoming blind is what helped set my expectations, and later my conviction, that I could learn to do just about anything, regardless of blindness.

I got to know the narrators. The same narrator usually did series of books or books in the same genre. Alexander Scourby read the classics. Bob Askey read many of the early Star trek novels. Yvonne Fair Tessler read romance and drama. David Hartley-Margolin read spy and adventure novels. I grew to know them all. When I sat down to read it was like sitting down with a friend in front of the fire and traveling into other worlds through the spoken word.

We have many more options for reading today. Kindle books can be read using synthesized speech. There’s Audible.com with a whole new cast of narrators. There’s Bookshare, a cooperative where people with print disabilities can access the text of books shared by other Bookshare members. But NLS talking books were there first. Reading an NLS talking book is like coming home.

Earlier this month I got to take a tour of NLS in Washington, DC. Judy Dixon conducted the tour. I learned how books were chosen to become part of the collection. It was all fascinating but the recording studio was the best. Celeste Lawson introduced herself and explained how the recording of talking books works. Some of the narrators have been reading for NLS for years. Some are actors in the DC area. They work three shifts, three hours each. Celeste explained that reading for longer than three hours can get to be a strain on the voice. After giving me the overview she took me around the corner. Laura Godfrey Dunlop was in the sound booth with Marie Garnett monitoring and running the recording equipment. After introducing me Celeste handed me a set of headphones and I put them on. In an instant I was listening to the creation of a talking book. Laura’s and Marie’s work was seamless. When Laura made a mistake or got tongue tied, yes, even the pros get tongue tied, she’d stop, Marie would play back the recording to the point just before the mistake had been made and Laura would pick right up at just the spot where she needed to. I found myself marveling at their skill. Sometimes I couldn’t even tell where the previously recorded part left off and where the new part began.

After the books are recorded someone in the recording department listens to the entire recording, noting places that might need to be rerecorded. Then the recordings go upstairs for a final quality assurance check and then they’re ready for prime time.

The free library service was created by an Act of Congress in 1931 to provide embossed books to blind adults. It was amended in 1934 to include sound recordings of books, talking books. Over the decades the Act has been amended and expanded to include books for children, braille music notation, and to extend services to individuals with print disabilities such as dyslexia and those who cannot read print due to physical disabilities. When I first became a patron of NLS I played almost all books on the talking book cassette player. Some books, however, were only available as records, floppy records played at a much slower RPM than a normal record and requiring a special player. In 2009 NLS introduced the website, Braille and Audio Reading Download, BARD, from which patrons can download digital audio books. Also in 2009 NLS began distribution of new digital talking book players.

My sincere thanks to Judy Dixon, Tamara Rorie, Celeste Lawson, and Jane Sheehan at NLS for a most enlightening experience. All those who work at NLS carry on a proud tradition. “NLS: That All May Read.”

2 thoughts on “That All May Read”