A Sound Practice – How I Recorded My Own Book 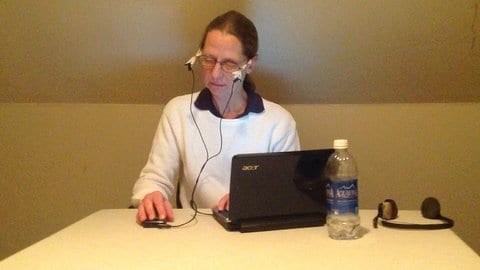 I’m finally coming up for air. The writing of my book, “Out of the Whirlpool, A Memoir of Remorse and Reconciliation” is done. My web master is flowing it into a PDF in preparation for printing and to get it ready for electronic distribution. I’ve recorded the book myself. At first, I imagined that I’d get a professional to record it. Then friends and colleagues began to encourage me to record it myself. At first it seemed impossible. But then I started working on it, experimenting, trying this method and that, until I finally felt I could do it.

I don’t read braille well enough to have read the manuscript from a braille copy while recording it. How could I do this? I broke up the manuscript so that each phrase was on a line by itself. I tried to make the phrases long enough to make sense but short enough that I could easily remember them. I bought binaural microphones from Core Sound in New Jersey. I used them with my Plextalk Pocket recorder from Freedom Scientific. First I tried using my screen reader, JAWS for Windows, also manufactured by Freedom Scientific, to listen to the manuscript using headphones while speaking each phrase into the recorder. This sort of worked but there was bleedover from the screen reader into the recorder and my breathing also made it into the recording. In an effort to move the microphones further away from the headphones through which I listened to the screen reader I taped long wooden applicators to the glasses and attached the microphones to the ends of the applicators which stuck out several inches from my face. The result was that I looked like some high tech insect with long wooden antennae but the sound of the screen reader could still be heard in the recordings.

I had already gotten forty chapters recorded before I hit on this new way of doing it. But the new way was so much better that I happily started all over again. The recordings are being professionally edited but I knew they wouldn’t be ready for my advance reader copies, most of which went out during the months of March and April. So I edited them myself. They’re far from perfect but they’re good enough. I copied the files to either a thumb drive or a flash drive for distribution to my advance readers who preferred spoken word to electronic text.

What’s this about advance readers you ask? At the advice of my editor I selected individuals to receive an advance copy of the manuscript. The advance readers are family members, friends, and colleagues. I also chose individuals associated with places and other entities that appear in the book. There’s a lot in the book about places such as the Seeing Eye, Freedom Scientific, and the National Park Service. I want to make sure I get all of the writing about these entities correct. Already I’ve taken feedback from three advance readers who have finished the book and incorporated it into the manuscript.

Jim shot a video of me recording a paragraph from the first chapter.

(See below to listen to the recording made in this video.) By now I’m pretty expert at this recording process but it took a long time to get to this point. Warning: You’ll hear the JAWS for Windows screen reader reading each phrase. If you’ve never heard a screen reader, or even if you have, you might wonder how I could understand a word of what it’s saying. The speech rate is pretty fast. This is just how I listen to JAWS, all the time. As I edited out the mistakes in the recordings I saved some of the more spectacular bloopers, see below.

The book is scheduled to be available for purchase and shipping on Memorial Day. Then we’ll do some publicity and promotion leading up to an official publication date, July 4th.

This has been an amazing journey. It’s taken a ton of patience and perseverance, every bit of which has been worth the effort. My husband, Jim, and I have listened to the recording together. Familiar as I am with it, I was still moved to tears at times. One advance reader has already called it a “Triumph.” That’s how I feel too. Yes, there is tragedy and adversity, but in the end, the book is a triumph.

I’m looking forward to sharing my creation with you!