When my office was in the Department of Human Services building in Bangor, Maine, an amazing thing happened. At the time I had been blind for about seven years. Having had vision until I was in my mid-twenties I have always visualized the world around me, even when I couldn’t see it. Doctors had long ago told me that my vision was not going to change, either for the better or the worse. I had accepted that and certainly expected no change in my visual perception.

The Bangor office was a “cube-farm” arrangement. Every morning, as I walked into the office, I passed by one of the cubical walls that, in my own way, I had decided was blue. One morning as I entered the office and passed by that wall I suddenly realized that I could see, really see,  that the wall was blue. I stopped dead in my tracks and turned to Pat, one of the secretaries. “Pat,” I began, “is this wall blue?” Receiving an affirmative answer, I stood there in amazement. I could see blue!

One morning, as my editor and I were going at it, head to head, trying this, trying that, revising here, commenting there, I told him this story. When my parents learned that I could see blue they sent me an oil painting of blue flowers. I told my editor about the painting, and he asked to see it. That painting hangs in an upstairs bedroom that my mother called “the blue cave.” The walls are ragged in vibrant shades of blue and have a wonderful texture. When we entered the room my editor stopped dead, gazing at the walls rather than the painting we had come to see. He was fascinated with the color and texture of the wall, saying it put him in mind of the marbleized endpapers used by a publishing house in London.

When the time came to design the cover for the book my editor kept coming back to the blue wall. I took a picture of the wall with my phone, and we used that as a starting place. My husband, Jim, worked with it first, dividing it into three parts, the wall “as is,” the wall distorted, and a solid blue part. We handed that image over to Myra, who is a pro with Photoshop. 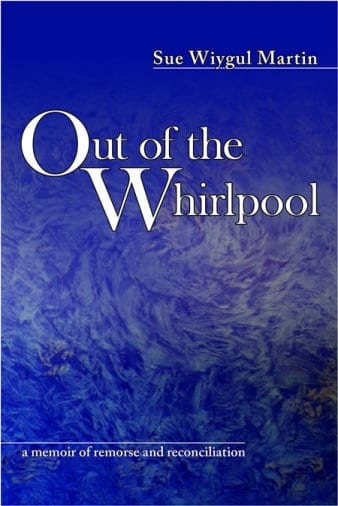 Myra gave us plenty of versions of the cover to consider. We went back and forth, trying this, trying that. Then, on Tuesday of last week, we all agreed that we had achieved exactly the right look for the cover of my book.

For those of you who can’t see the image I’ll describe it. Starting at the bottom, the blue wall is shown “as is” with all of the rich texture and hues. As your eye moves up the cover the texture gradually fades until the top portion is a clear, clean solid blue. My name is in that solid blue, right-aligned and with a white underline that extends off the right edge of the cover. Below that is the title of the book, also in white. Towards the bottom and left aligned is the text, “a memoir of remorse and reconciliation,” with a narrow white line above it that extends all the way off the left edge of the cover. There is a narrow white border around the entire cover.

1 thought on “The Blue Wall”