“Hello, my name is Sue Martin. I’ve just published a book and I’d like to show it to you.” Thus began my conversation with Deb Taylor, the buyer of books for Sherman’s, in Bar Harbor, Maine. I’m pretty sure that Deb hears that with some regularity, but she agreed and asked me to come to the book store right away. I grabbed a book and Jim, Kismet, and I set out into the cool and drizzly morning.

Seated in Deb’s cramped office I told her about my book. When she learned that we live in Alabama and could not easily return to the store to pick up the unsold copies of my book she agreed to take only two of them. I signed some papers and, when Jim returned with the second book, we headed out. 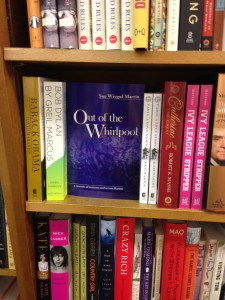 “Let’s go ahead and mail the rest of these books home,” Jim said. He wanted to get rid of the second, almost full box of books. We had second day aired two boxes of books to Maine for my keynote address at the American Council of the Blind of Maine annual convention. I was thrilled to have sold one full box of books and was sort of coming down from the high as I contemplated the second box. At the last minute I asked Jim to pull out three books, no, make that four, from the box before we sealed it and shipped it home.

That task done, we returned to the Bar Harbor Inn and hung out in our room, listening to the waves rolling on to the rocky shore and the occasional thrum of a diesel engine as a fishing boat headed out to sea.

“I’ve got to go back to Sherman’s,” I muttered, listening as my screen reader spoke the email message from Deb Taylor.

“I’ve got to sign another form, I think she said it was a W9 or something.”

“Okay, go ahead. I’ll go to the Chocolate Emporium next door while you sign whatever it is. I want to get some chocolate to take back to work with me.”

Sherman’s has three doors and this time I entered a different one than we had entered before. I knew at once that it was different and I knew I’d have to ask for help. As the employee I had flagged down lead me back to Deb’s office, another employee, seeing me work my way around the shelves and displays, was hot on my heals.

Turning to face Laura, I said, “Wow!” and gave her a hug. Jim and I had both taught Laura’s brother, Scott, when we lived and worked as blind rehab professionals in Maine.

“What are you doing here?” she asked. Picking up my book, I handed it to her and explained.

“I want one!” she exclaimed. Will you sign it for Scott?”

I wrote a note to Scott in the book and handed it over. Then I dug out a thumb drive with the audio book on it and handed that over as well. I was thrilled!

After Laura left the office Deb turned to me, saying, “Okay, that’s half my stock. How many other books do you have?”

Feeling almost giddy by now, I told her I had four more books and she said she’d take them all.