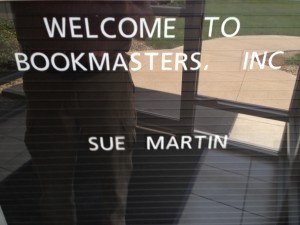 In March, the guide dog affiliate of the American Council of the Blind, asked me to speak at their convention in Columbus, Ohio on July 9th. They wanted to hear about my life and my book. How cool was this?

As soon as I realized that my hobby of writing might actually produce a book, I hired an editor. I knew nothing about publishing and I wanted to do it right. I wanted to employ the time honored traditions of the craft of writing and publishing. We did structural editing. We did line editing. We did copy editing. We got a final manuscript. Yea! Pat self on back and relax, right? Wrong. Who’d have thunk there was so much more heavy lifting involved in getting me to that conference, book in hand?

I promptly accepted the invitation from the guide dog folks, telling them with great confidence that my book would definitely be published by then in all sorts of media, print, electronic text, spoken word audio and pretty much any other thingie that people use to read books.

April passed. May passed. Problems had to be solved. Major decisions, none of them simple, had to be made. All added time to the publication schedule. As mid-June approached and I still had no book in hand it felt I had been aiming at that talk on July 9th for about half my life. My focus narrowed to that square on the calendar. Have books in hand by that date or die!

Two and a half weeks before the talk I was getting slightly panicked. Still no books. I had planned to make the audio version of the book available by download only. But with the print seeming less and less certain I frantically set out to see about getting the audio version put on something that I could hand out. I had to have something, anything! I hit the Internet, seeking a company from which I could purchase thumb drives in bulk. I found iPromo in Chicago. It was Jennifer Volinsky, with the marvelous title of grand ambassador, who answered the phone. Sure they could sell me 100 thumb drives. Then she went on, “We’ll print the name of the book on them and copy over all the files. How would that be?” Are you kidding? That would be pretty darn swell.

Next I worked with Olga Chichuk. She did all the techie and quality control stuff. I uploaded the MP3 files to iPromo’s FTP server and five days later the thumb drives arrived. Know how much 100 thumb drives weigh? Neither do I but that box was satisfyingly heavy.

Back to those darn print copies. We weren’t ready to print the final versions of the book so decided to do a limited edition print run specifically for the conference. By now it had become clear that I wouldn’t be able to have the books printed and shipped in time. My editor located a printing company in Ashland, Ohio, about 75 miles from Columbus. We decided to have the books printed there. That happy decision brought me together with Randy McKenzie of Bookmasters, Inc. Randy is pretty much my hero.

When Jim and I arrived at Bookmasters, lo and behold, on their marquiswas, “Welcome Sue Martin.” Feeling slightly bemused , we entered the building. To my surprise, the receptionist greeted me by name. Upon reflection I realized that my dog might have given her the clue to my identity.

Randy appeared and escorted us to a conference room. And, wonder of wonders, he placed my book in my hands. Then he gave us a tour of the facility. After walking through some admin areas, Randy opened a door into a huge room where books are printed and bound. It was amazing. Randy walked us all around the room, explaining each process in the creation of a book. He really knows his craft and it was clear that he takes great pride in it!

At door number 10, Randy and Jim loaded the boxes of books in the car.

Somewhere in this mad dash to get thumb drives and books in hand, a friend sent me the following: “When something goes wrong in your life, just yell. “Plot twist!” and move on.”

Nothing to put in people’s hands at the luncheon? No problem, yell plot twist and go out and find a company that can meet your insane deadline for placing the audio on thumb drives.

Books can’t be shipped in time? No problem, yell plot twist, find a company within driving distance of the event  and go get them myself!

It was only after we closed the trunk on those lovely boxes full of my books and thumb drives that I knew I was done with plot twists for that event.

Life is full of the unexpected. Just yell plot twist and move on! 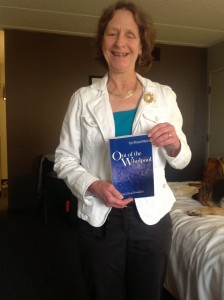